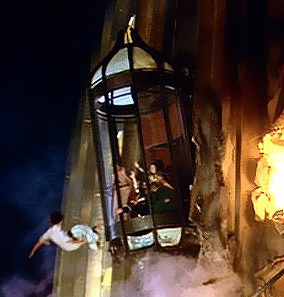 Captain Obvious would probably say this is not a good place to be in right now.
Advertisement:

Elevators (or lifts as they are called in the UK) are pretty mundane devices. They go up, they go down, and they move people and property vertically. The general rule of the elevator business is that, when their job is done right, you don't even notice the trip. There's a reason for this: because elevators carry people and improper operation can result in injury or death, there are various rules. Elevators have certain codes and requirements and generally have to be inspected every year.

If the inspection official with the city or region does an inspection and it fails, the elevator will be ordered out of service as unsafe until it is brought back into code.

But sometimes, that's exactly what happens. Because of tampering, inadequate maintenance, or unusual environmental conditions, something goes wrong with an elevator, with very bad results. If you're lucky all that happens is you're Locked in a Room. If not, "going down"...

May lead to Born in an Elevator. Can also be used as a way to relieve sexual tension, especially if two people who seem to be incompatible share a big kiss.

Note that this trope deals with ordinary elevators that fail or are sabotaged by someone. When the elevator itself can make itself fail, that's not Elevator Failure, that's Evil Elevator.

Definitely not related to Elevator Going Down, unless someone decides they Must Not Die a Virgin.

Gloria and the Greens end up trapped in an elevator after Cricket messes with all the buttons. The situation is not helped when the emergency phone gets busted.

Gloria and the Greens end up trapped in an elevator after Cricket messes with all the buttons. The situation is not helped when the emergency phone gets busted.