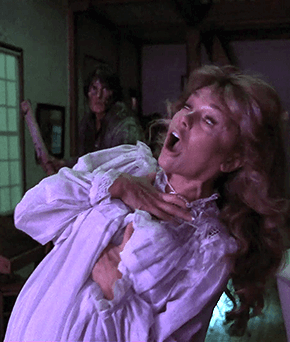 "As far as we know, in a man that age, only two things can cause stroke: Violent anger, or fear."
— Dr. Tad Johns, The Monster That Challenged the World
Advertisement:

Murder Is the Best Solution; sadly, it's not always practical or possible to simply shoot the target. Either because they want to avoid being incriminated in the murder or have no corporeal body, the murderer will use a Fright Deathtrap to figuratively and literally scare someone to death. The Fright Deathtrap consists of scaring someone at just the right moment so they end up dead in circumstances that Occam's Razor will imply was an accident rather than foul play or the supernatural.

This usually requires a bit of set up, though; the murderer has to know the victim's routine, surroundings, and/or reactions well enough to manipulate them into a nearby danger, often one they have to identify or place themselves. For the sake of The Perfect Crime, it should be something that was always there, but a harmless gift (or abandoned object) serves just as well if it's in a place that can help kill the victim.

This isn't anywhere near foolproof, of course, and runs the risk that failing to scare the victim into a Fright Deathtrap puts the thwarted murderer out in the open. If he could die a second time, a ghost might die of shame at being as ineffective as a Peek-a-Bogeyman. The would-be victim now knows someone (or thing) is out to get them. ...Unless the would-be murderer used a spring-loaded cat as the scare. Then again, maybe the murderer was going for a long-term frightfest...

Compare Tricked to Death and Psychic-Assisted Suicide for other variations on the theme of killing someone by manipulating them into a lethal situation.

Not to be confused with Gaige's robot pal.