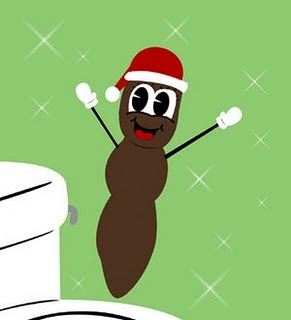 Mr. Hankey, the Christmas Poo!
He loves me and I love you!
Daughter: Daddy? There's a giant doo-doo in the bathroom.
Father: Ehhh, I'm really proud of you honey.
Daughter: But I didn't make it, Daddy. It came out of the bathroom and it started saying bad words. I'm scared.
Father: There's nothin' to be scared of, honey. Number twos can't talk.
— Monsturd
Advertisement:

Sentient feces. Living dung. Intelligent droppings. Basically, poo that's alive. Doesn't necessarily have to speak, as long as it's sentient. Anthropomorphised doodoo is generally for comedic purposes, but there are exceptions.

A subtrope of Toilet Humor and Animate Inanimate Object.