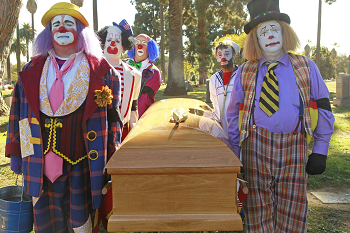 ...Then the casket was accidentally dropped, causing twenty dead clowns to roll out.
Vienna Central Cemetery: Half the size of the City of Zurich, but at least twice as fun.
— Austrian saying
Advertisement:

Even at a funeral, Hilarity Ensues. This trope summarizes all the wacky hijinks that can commonly occur at a sitcom funeral. It's the comedic flipside of the serious Due to the Dead.

Or, he is asked to deliver the eulogy, and struggles because he either barely knew the deceased or hated them intensely.

If the deceased is cremated, dust to dust, Ashes to Crashes. The ashes are just waiting to be spilled, worn, consumed, or disrespected in some way. If it's a particularly black comedy, expect the coffin to be knocked over at some point, and for extra Black Comedy points, the corpse to be abused in some fashion.

Then of course there's always the "missing corpse/casket" situation, which often has the guest of honor rolling out of control down a street, dodging cars, fruit carts, sheets of glass, and other obstacles. And then there's the instance where a main character is declared "dead" to protect him from a bloodthirsty revenge-seeker, with matters sometimes becoming complicated when the villain discovers that his supposedly dead enemy is still very much alive.

Expect plenty of Black Comedy to be involved.

Or maybe the characters will play an Of Corpse He's Alive. This is the generally the opposite of the heartwrenching Meaningful Funeral, but there can be some overlap. Compare And There Was Much Rejoicing, Last Disrespects, or Speak Ill of the Dead, where the non-dead characters may indulge in this.

Or, finally, the heartwarming version that we get a bit in real life. The deceased was a comic (or even a Sad Clown) and would abhor the idea of people wasting a day and a gathering moping about their passing. This is the basis of a Cheerful Funeral: ultimately full of good spirits as everyone shares their fondest memories of the passed and honors their memory with a smile or two.