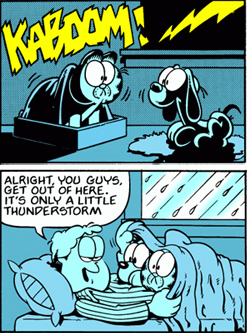 A character is woken up in the middle of the night by a younger character—typically either a son, daughter, younger sibling or younger friend. The younger character was woken up by something frightening, like a nightmare or a bad storm, and can't quite manage to go back to sleep. They'll meekly ask if they can sleep with the older character, just for that night.

In general, this is used to emphasize the bond the two characters share, either familial or friendly, or (less commonly) to make an otherwise abrasive or aloof character look sympathetic. It will probably result in Sleep Cute.

Frequently a source of Heartwarming Moments.