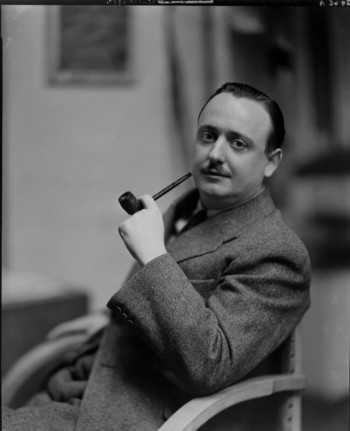 John Dickson Carr (November 30, 1906 – February 27, 1977) was an American Mystery Fiction writer, frequently known as the master of the Locked Room Mystery. Several of his works were published under the pen-name Carter Dickson. (He also had a couple of other pen-names that he used very rarely.)

His best-known work is probably The Hollow Man (US title: The Three Coffins), part of his on-going Dr. Gideon Fell series. He also had a popular series starring the detective Sir Henry Merrivale, written as Carter Dickson. These two series make up a large portion of his work, but he also had a couple of other, smaller, series, and a number of standalone novels and stories.

He was a friend of Arthur Conan Doyle (creator of Sherlock Holmes), and published a biography of Doyle in 1950. He also collaborated with Doyle's son on several Holmes stories after Doyle died.

Works by John Dickson Carr with their own pages:

Other works by John Dickson Carr contain examples of: