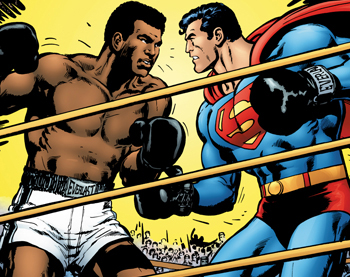 Float like a butterfly, sting like a locomotive.
"Depending on one's training and how they're used, Devil Fruit powers can become a weapon as powerful as any. I'm not like the rest of you fools, who depend solely on your powers."
— Crocodile, One Piece
Advertisement:

Take an already abnormal character and teach them some sort of mundane skill to kick their badassery up another notch. Got an Imagination-Based Power? Some engineering classes might make your constructs more formidable, along with art classes to stretch the imagination. Got Super Strength? How about some karate to avoid being Unskilled, but Strong? The power and the skills involved can exist in numerous combinations, but it works to the same effect.

Compare with Mundane Utility, which is a sister trope. It may invoke cases of Mundane Made Awesome. If the character needs trained combat skills normally rather than just for a few special circumstances, he probably Fights Like a Normal. One place to learn this sort of thing is in a Superhero School, as that's usually the whole point. This trope may also help a character find ways to push the limits of their powers, perhaps even overcoming the limitations imposed by Required Secondary Powers as a result of having new skills and knowledge needed to work around their power's weaknesses. Compare also How Do I Shot Web?, in which the character requires specialized training or knowledge just to use those powers at a basic level.

Contrast Charles Atlas Superpower which is effectively the inverse of this trope. While Boxing Lessons For Superman features an extraordinary being learning a mundane skill to augment their abilities or serve as something extra to fall back on, Charles Atlas Superpower has a supposedly ordinary being able to achieve the extraordinary through proficiency in a mundane skill. See Strong and Skilled, which is what this trope often results in, or Talented, but Trained, wherein the hero(ine) is already powerful, but focuses and refines their abilities. Also contrast How Do I Shot Web?, where one must learn how to use their powers.

For more information on this trope, please see our Analysis Page.