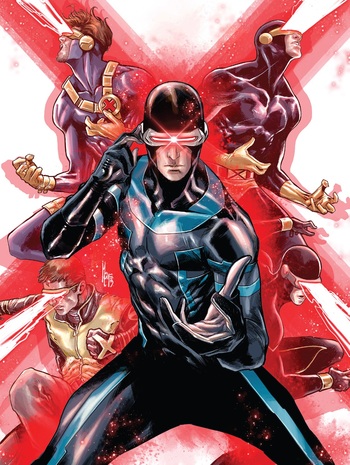 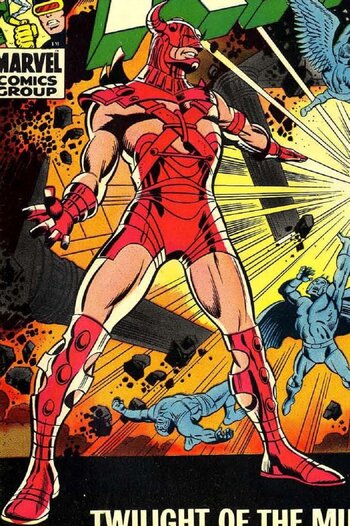 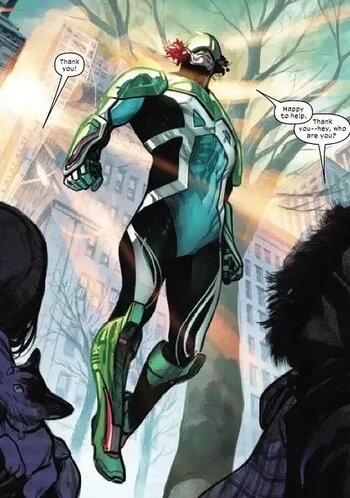 The very first X-Man and deputy leader of the X-Men turned General of Mutantkind. He first appeared in The X-Men #1 (September 1963), created by writer Stan Lee and artist Jack Kirby.

Leader of the X-Men and Xavier's top student, Scott Summers is skilled at strategy and managing people, but fails at most attempts at personal interaction. The years of pressure in being an example for other mutants and a combat field leader have wound him up into a tight-assed, stuffed shirt: this brings him into conflict with just about any other mutant who doesn't have standards as high as Cyclops, which is nearly all of them. His powers are energy beams that shoot out of his eyes, which are strong enough to level mountains, and uncontrollable unless filtered with ruby quartz; it's implied that his inability to control his powers has subconsciously driven him to have control and order in every other facet of his life.

Post-House of M, 98% of all mutants lost their powers. With his race near extinction, Cyclops came to the conclusion that Xavier's vision was no longer going to cut it. Survival was the new primary objective. This saw Cyclops transition from the Field Leader and "Headmaster" of the X-Men, to the General of Mutants.

After personal differences and disagreements on how to deal with the oncoming threat of the Phoenix spiraled out of control and resulted in the death of Xavier and the return of the X-Gene, Cyclops was held responsible for the mess and imprisoned, now considered a Fallen Hero and a terrorist by his former allies. Plagued by guilt, he originally planned to let himself be killed in prison so that at least he could go down as a martyr until he realized that the new mutants arising after this are going to be hounded and hunted. Escaping with the help of his former Extinction Team, Cyclops founded a new Xavier school using the former site of Weapon X and began work on protecting the new mutants, despite being hated and feared.

As well as that, under the claim of trying to save Scott from himself, Beast went back in time and brought the original five X-Men to the present, Scott among them. Teen Scott was originally disgusted by what he was told of his adult self until he came to realize that a lot of it isn't quite the truth and, with the rest of the team, jumped ship to join him after they find out they can't return to their home timeline.

At the beginning of Death of X, Scott is killed by the M-Pox sickness, but Emma Frost makes everyone believe he was murdered by Black Bolt in order to further a conflict between Inhumans and mutants. In the meantime, Teen Scott and the rest of Original Five are working as a team based on Madripoor, overseen by Magneto of all people. The original Cyclops returned in Extermination (2018), two (or three) years after his death, and returned to the X-Men in Uncanny X-Men (2018), where he also reunited with a returned Wolverine — the two are stated to be the last X-Men and will rebuild the legacy of the team.

Following the 2019 relaunch of the X-franchise in X-Men (2019), his traditional role as the linchpin and Standardised Leader of the X-Men has been taken to its logical extreme. Unlike the other X-books, which feature a core cast of characters, each issue of the X-Men follows a different eclectic team of mutant powerhouses, with Scott as the only consistent member.

Other than being a staple of the franchise, Cyclops has starred and co-starred in several series. Teen Cyclops has his own ongoing series.

Portrayed by James Marsden in the original trilogy of the X-Men Film Series, by Tim Pocock as a teenaged Scott in X-Men Origins: Wolverine, and by Tye Sheridan as a younger Scott in X-Men: Apocalypse.

Cyclops has appeared in the following works: