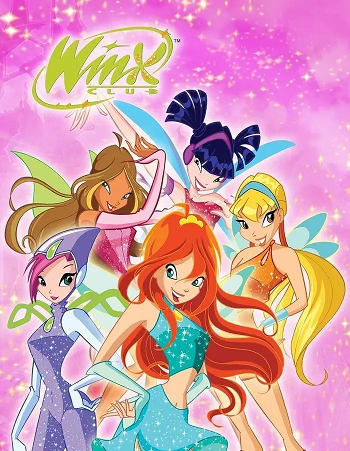 Winx, you're magic now!
Winx Club is an animated series co-produced by Rainbow SpA and Nickelodeon, which are both part of Paramount Global. It was created by Iginio Straffi. The show centers on the Winx, a group of fairy warriors attending the Alfea College for Fairies. Imagine Harry Potter crossed with Power Rangers, all tied up in a Magical Girl show.
Advertisement:

Iginio Straffi outlined the show's story from the beginning, intending it to wrap up after the third season. Plans changed after the show turned into a Cash Cow Franchise, and the show returned for a fourth season. In 2010, Viacom's Nickelodeon started producing a Soft Reboot of the series, inducting

Winx into the Nicktoons franchise. The Nick revival kicked off with four newly-produced specials retelling the first two seasons of the original show. In 2011, Viacom itself became a co-owner of Rainbow SpA alongside Straffi. They brought on a crew of longtime Nick veterans as writers for the show, including story editor Janice Burgess. The voice talent included live-action stars Ariana Grande and Keke Palmer.

The seventh season wrapped production in 2014 amid a flurry of financial problems at Rainbow. Five years later, an eighth season premiered which, at Straffi's own discretion, saw the show ReTooled to target a much younger audience, while most of the show's crew members had already stepped away after the previous season.

Winx Club has since spawned several Spinoffs. The mini-series Pop Pixie premiered in 2010, set in an Alternate Universe with the Pixies as main characters. It didn't last long. World of Winx premiered in 2016 with two seasons before being cancelled. Finally, a Darker and Edgier live-action reimagining aimed at young adults, titled Fate: The Winx Saga, premiered on Netflix on January 22, 2021.

If You're a Winx

If You're a Winx