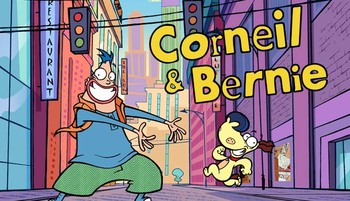 "A talking dog! How absurd."note From left to right: Bernie and Corneil.
"I am a dog. A dog that's incredibly bright
I can talk, read, and write...
And surf the net all of the day and all of the night!"
— Expository Theme Tune
Advertisement:

Watch My Chops (also known as Corneil et Bernie and Corneil & Bernie in France and the USA respectively) is an animated television series about Corneil, a highly intelligent dog who can talk, and Bernie, his dimwitted pet-sitter.

Corneil is a hyper-intelligent dog, but has long come to the conclusion that his intelligence is best kept as a secret since he's already living a very comfortable life as a pampered pet. His plans go awry when his owners hire Bernie as a pet sitter and Corneil ends up talking in front of him. Bernie agrees to keep Corneil's secret since it lands him a comfortable and secure job, and the show chronicles their misadventures, such as with Bernie's personal life or Corneil having Bernie act as a chaffeur/proxy.

Watch My Chops was produced, written and animated by French animation and production studio Millimages. The English dub was done at The Sound Company Studios in London. It aired on France 3 in France, on CBBC in the UK, and on Nicktoons in the USA. Only two seasons were initially produced (they were merged as one season in the UK run) with twenty-six episodes each.

The show was uncanceled in 2014, with the new episodes being created by using Flash animation. While they were dubbed into English, these episodes have only aired in France and Australia.