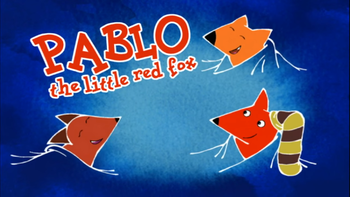 Clockwise: Pumpkin, Pablo, and Poppy.
Pablo the Little Red Fox is a series of short, five minute cartoon produced by Millimages. They focus on the titular Pablo and his siblings Poppy and Pumpkin, along with their parents Red and Rose, and their friends Finbar the cat, Fromage the Frog, and Helena the Hedgehog. It originally aired from early to late 1999, and won a BAFTA in 2000.