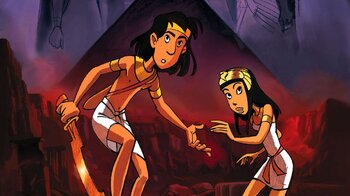 Papyrus is the Animated Adaptation of the Belgian comic of the same name. It was created in 1998 and ran for two seasons (52 episodes). It was shown on TFOUTV in France and Radio-Canada in Quebec.

The animated series has a distinctive overarching story that borrows various characters and events from the comics. Here Papyrus, the young fisherman is chosen by the Egyptian gods to defend Egypt from the threat posed by Set, the formerly banished god of deserts and storms after the malevolent god captured and sealed the Kingdom’s protector god Horus in a magic sarcophagus and kept in the black pyramid of Ombos. Alongside Papyrus is Princess Theti, daughter of the Pharaoh and High Priestess of Isis, Tiya, the princess of robbers and Thebes and her monkey Shepsi, Imhotep, a young scribe with ambitions of being an architect and Bebo, a joyful and pacific, though clumsy former Libyan prince and his donkey Kamelot, Hapou, a boy whom is believed to have a learning disability but is actually prone to possession by various gods and Ratoufer, the High Priest of Horus who helps guide the heroes on their adventures.