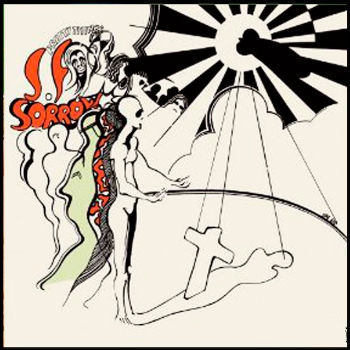 "You'll never be as lonely as me..."
"For ten weeks now number three stood empty
Nobody thought there would be
Family laughter behind the windows
Or a Christmas tree
Then a couple from up north
Sorrow and his wife arrived
Before the sun had left the streets
They were living inside.
Then before too long
The street it rang with the sound
From number three there came a cry
S. F. Sorrow is born..."
Advertisement:

S.F. Sorrow is the fourth studio album by The Pretty Things, released in 1968. It was released on the same week as The White Album by The Beatles and The Kinks Are the Village Green Preservation Society by The Kinks. However, it wasn't released in the US until August 1969. It is their final album to feature drummer Skip Alan, who suddenly quit during the recording of this album. He was replaced by John "Twink" Alder, who helped complete the album. S.F. Sorrow was one of the very first Concept Albums ever created by a Rock Band, along with Nirvana's note The 1960's band Nirvana, not the 1990's one The Story of Simon Simopath.

The story told in the Album centres around a man named Sebastian F. Sorrow, who is born to a standard family in the UK and grows up with a vivid imagination until he has to get a job at the Misery Factory. He is eventually drafted into World War I and, upon serving his term in a forgotten haze of Gunfire and Artillery shells, marries and moves to a Country called Amerik. However, his wife happens to take the Windenburg, which bursts into flames and kills her. Sorrow, depressed over his wife's death, finds himself in the presence of a mysterious figure named Baron Saturday, who invites Sorrow on a journey to his inner mind and steals Sorrow's eyes for his own purposes. Sorrow is flown towards the moon by the Baron, which turns out to be his face, and enters his mouth that leads him to a room full of mirrors. After Studying the mirrors, which contain memories of Sorrow's childhood, Sorrow realizes the world is unkind and uncaring, and that he can't trust anyone ever again. In a state of despair, he blocks himself off from the rest of the world and subjugates himself to eternal loneliness.

S.F. Sorrow did not do well in either the UK or the United States, due to competition from more popular bands, mismanagement of selling the record, a lack of promotion for it, and the fact that Motown were the ones who released this album in the USA (via their rock-oriented subsidiary, Rare Earth Records). However, it is critically regarded as one of the best albums by The Pretty Things, and has been re-released with additional songs from the Pretties' Psychedelic Rock period.

Lead vocalist Phil May also painted the powerfully morbid cover art for the British version, shown above. The American release had a different cover in which the band name and album title appeared inside a coffin-shaped border.