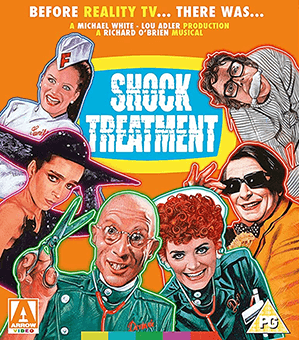 Shock Treatment is a 1981 musical comedy film from the creators of The Rocky Horror Picture Show, starring Cliff DeYoung, Jessica Harper, Patricia Quinn, Richard O'Brien, Charles Gray, Nell Campbell, Ruby Wax, and Barry Humphries. Although Brad and Janet are once again major characters (albeit played by different actors), it isn't a direct sequel and few characters aside from them return.

Denton ("The Home of Happiness")note Now in Texas instead of Ohio, the town that the now-married Brad and Janet Majors (DeYoung and Harper) call home, isn't what it used to be. It's now dominated by DTV, a TV station run by fast food mogul Farley Flavors (also DeYoung), and most of its residents serve as a permanent audience for its programming. Indeed, the entire film unfolds within the giant studio. Brad and Janet have lost the passion in their marriage, and when they're chosen to be part of Marriage Maze by kooky host Bert Schnick (Humphries), it doesn't take much convincing for Janet to allow her "emotional cripple" husband to be committed to the asylum/Soap Opera Dentonvale to see if he can't be cured by Doctors (and siblings) Cosmo and Nation McKinley (O'Brien and Quinn), alongside their staff - Nurse Ansalong (Campbell) and Rest Home Ricky (Rik Mayall).

Unbeknownst to Brad or Janet, Farley is manipulating these events from behind the scenes - he is interested in molding Janet into his newest star for his new show Faith Factory, and she's easily enticed into forgetting about Brad. The only people who see through the smoke and mirrors of Farley and his crew are Betty Hapschatt (Wax) - freshly divorced from Ralph (Jeremy Newson) after his affair with the vivacious Macy Struthers (Wendy Raebeck) - and her Denton Dossier co-star Judge Oliver Wright (Gray) after the two are taken off the air, and they set out to find out the truth behind DTV and reunite the couple before it's too late...

It was both critically and commercially unsuccessful, and the filmmakers were disappointed with how it turned out. It was originally conceived as a direct sequel (Rocky Horror Shows His Heels, which would have involved Dr. Frank-N-Furter being restored to life among other things), but for many, many reasons ranging from Tim Curry not wanting to play Frank again to the 1980 Screen Actors Guild strike, it was gradually transformed into a media spoof that is far removed from the kinky farce of the original. Within the Rocky Horror fanbase, it generates mixed reactions, with many RHPS devotees preferring to not acknowledge it; however, it does have its own fan club, the presidents of which provided an audio commentary on the 2006 DVD release.

Not to be confused with the 1964 neo-Noir film of the same title.

"The sun never sets on those who ride into it!"
Feedback

After escaping from Dentonvale, Brad confronts Farley and the two sing back and forth about how the other is worthless and should die.

After escaping from Dentonvale, Brad confronts Farley and the two sing back and forth about how the other is worthless and should die.