Film / Singin' in the Rain 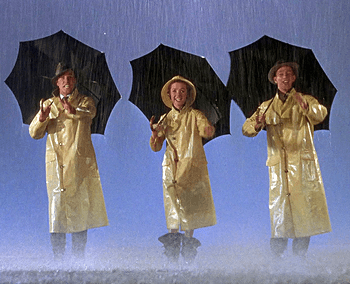 "What a glorious feeling!"
R.F Simpson: Every studio is jumping on the bandwagon, Dexter. All the theaters are putting in sound equipment and we don't want to be left out of it.
Don Lockwood: Well, we don't know anything about this gadget!
R.F. Simpson: What do you have to know? It's a picture. You do what you always did! You just add talking to it!
Advertisement:

A classic 1952 Musical film from MGM, Singin' in the Rain happened when the legendary team of Comden and Green were told to pound out a script based on songs the film's producer, Arthur Freed, had co-written for MGM's early musicals.note The only totally original song in the film is the novelty number "Moses Supposes". "Make 'em Laugh" is generally considered a rip-off of Cole Porter's "Be a Clown", though he never complained.

The result, co-directed and choreographed by Stanley Donen and Gene Kelly, is a frothy but sledgehammer-accurate comedy set during the transition from silent film to talkies — a period of major upheaval in the movie industry, as stars learned to cope with the novel concept of 'talking' and all its attendant requirements. Chief among them being, of course, that now they had to act.

Don Lockwood (Kelly) is the current king of silent Hollywood, one-half (or perhaps three-quarters) of the A-list team Lockwood & Lamont. His "partner" is Lina Lamont (Jean Hagen), a bottle-blonde, bubble-brained diva whose ego has long since turned Don off any thought of carrying their romance off-screen... not that he can convince Lina of that.

In the main, however, Don's the George Clooney of his day: rich, debonair, enjoying the perks of celebrity life to the hilt. Loyally at his side at all times is his lifelong best buddy and current studio musician Cosmo Brown (Donald O'Connor), who is just tactful enough to keep quiet about the duo's past as a failed vaudeville act.

Then, fleeing a mob of fans one night, Don's rescued by self-described "serious actress" Kathy Selden (Debbie Reynolds). She not only proves immune to his movie star charms but accuses him of having no artistic substance whatsoever: "just a lot of dumb show!" Don is incensed, but her words prove prophetic with the startling acclaim for The Jazz Singer. The studio abruptly (as in mid-take) decides to make the current Lockwood & Lamont picture a "talkie" too.

Cue frantic — and cringe-worthy — attempts on everyone's part to come to grips with the new technical requirements. Unfortunately, no technology in the world can remedy Lina's voice, a shrill Brooklyn screech completely at odds with her silent image as a refined leading lady.

Faced with utter ruin when the now wildly-anachronistic Dueling Cavalier is hooted down at a test screening, Don, Cosmo, and Kathy cook up a plan so stupid it just might work: convert the whole mess into a fantasy musical. Of course, Don's co-star can't sing any better than she can speak. Thus, inspired by a synchronization accident during the screening, Cosmo also invents dubbing and arranges for Kathy to secretly record all of Lina's songs and dialogue. Inevitably, Lina discovers the ruse—and is suddenly threatening to ruin everyone's careers and potentially seize the studio. Maybe she's not as dumb as she looks...

Will Kathy be forced to give up her dreams? Or will the power of True Love win out over studio greed? And will Cosmo ever get to "start suffering and write that symphony"?

Alternative Title(s): Singing In The Rain