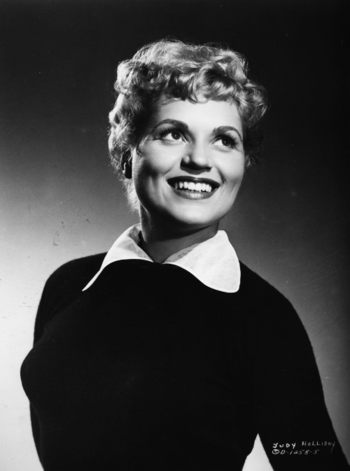 As spirited and vivacious as they come.
Advertisement:

Known for her high-pitched, dumb blondes, Judy Holliday (born Judith Tuvim, June 21, 1921 – June 7, 1965) was an American stage and film actor who began her career on Broadway (Kiss Them for Me) and gained fame as Billie Dawn in the Broadway hit, Born Yesterday (1950). Hilariously ironic since Holliday had an IQ of 172, she made a career of playing various dumb blondes, genius ditzes, and the like.

A short film career that spanned only a decade or so, Judy had a supporting role in the Hepburn-Tracy vehicle, Adam's Rib (1949), as the scorned wife Doris Attinger, to showcase her talents to Columbia Pictures studio head Harry Cohn. It worked, and soon she had a six-movie contract with Columbia. Her most famous role came with George Cukor’s film adaptation of Born Yesterday (1950), co-starring William Holden. She deservedly won an Academy Award for her effort as the clueless, but willing to learn, Billie Dawn. She beat out other renowned performances: Gloria Swanson as Norma Desmond in Sunset Boulevard, and Bette Davis as Margo Channing in All About Eve. Not being able to attend the ceremony, Ethel Barrymore accepted her golden statuette for her.

But fame came with a price: the 1950s was a difficult time for Judy, as the Red Scare ravaged on, many stars found their careers irreparably damaged for having had Communist leanings, and Judy had had a passing affiliation with the party. People picketed her films, as she was considered a subversive. Judy was called to a hearing from the Senate Internal Security Subcommittee to testify about her past Communist leanings, and probably because she was Jewish, too. But, surprisingly, Judy had the backing of Harry Cohn and the best lawyers and publicists the studio could get. What was their advice? Play up your Dumb Blonde persona to the committee. And it worked. SISS fell for her ditzy act hook, line, and sinker and didn't bother her again even when she didn't name any names.

For the rest of the decade, she played similar types of endearing ditzy women, and collaborated with George Cukor in two other films, The Marrying Kind (1952) about a couple telling the story of how they divorced (introducing former cop turned actor Aldo Ray), and It Should Happen to You (1954) in which Jack Lemmon began his movie career. His second feature film was also with Judy, a Comedy of Remarriage of two professionals, Phffft! (1954).

Other films include The Solid Gold Cadillac (1956) where she plays Laura Partridge who takes on a corrupt board of directors, and Full of Life (1956) where she reconciles the differences between her husband and her father-in-law.

During this time, she was also working on the Comden and Green Broadway musical especially written for her, Bells Are Ringing, for which she would later win a Tony Award. In 1960, it appeared on the big screen, directed by Vincente Minnelli. Judy renewed her role as Ella Peterson, a lonely girl who works for an answering service, called Susanswerphone, who decides to change the lives of her clients. It co-stars Dean Martin as the suave, "sleeping prince" Jeffrey Moss. This was her only colour film (ignoring the last colour shot of The Solid Gold Cadillac) and, unfortunately, last film.

She starred in one other Broadway production, Hot Spot, and a play called Laurette, about the influential stage actor Laurette Taylor. The latter play was prematurely closed due to Judy's battle with breast cancer, and she succumbed to the disease on June 7, 1965. She was only 43 years old.