Waiting for a Break 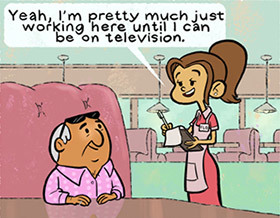 Be careful what you wish for...

"I can show I got what it takes
But I already used my fifteen-minute break
I'm, working for minimum wage
When I should be up on the stage"
— Cyrus, Let It Shine, "Tonight's the Night"
Advertisement:

Artists, especially writers, actors, and musicians in their early days get by on jobs not directly related to their desired eventual career in order to prevent themselves from being a literal Starving Artist. They may ferry people about as taxi drivers, lend friendly ears as bartenders, pump gas at a garage, or put their charisma to use in getting the tips as waiter or waitress.

That last one is especially common, and though this trope covers all iterations of artists working in what are traditionally low-paying and often considered less 'fulfilling' jobs, the waiting profession is what has influenced the trope name. It isn't uncommon to see a waiter or waitress in fiction who is waiting for the day they get spotted by an agent, a movie studio picks up their script or they net that record deal. In fact, if anybody connected to these trades decides to go out for a meal at the restaurant a character who falls into this trope works in expect them to attempt to woo their customer with their performance of Hamlet, try to serve them their screenplay as a course, or break into song at random.

The reason for the prevalence of the selected career being waiting is, as explained in this article

which shares its title with this trope (but the name was coined independently, it's a Pun after all) is because it lends itself well to an auditioning actor. They can work a few long nights a week and use the rest of the time to audition or rehearse, and as mentioned above they can use the charisma many consider necessary to be an actor to get themselves tips, with the people they are serving as their audience. In other words, Truth in Television and Write What You Know are in play here.

Related to Starving Artist (or Giftedly Bad if the reason they are still in such a job isn't that they are an undiscovered genius, but they just think they are). Contrast Pursue the Dream Job. See also Fallen-on-Hard-Times Job.