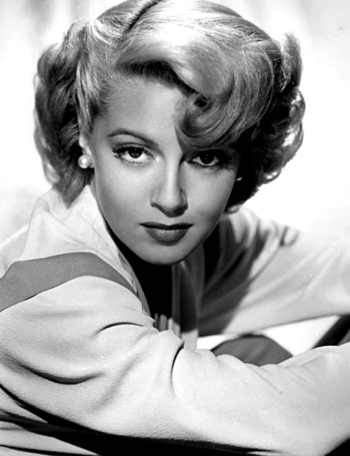 "It's said in Hollywood that you should always forgive your enemies – because you never know when you'll have to work with them."
Advertisement:

Her "discovery" in 1936 is the stuff of Hollywood legend: William R. Wilkerson, the publisher of The Hollywood Reporter, noticed her as she sipped a Coke at the counter of a Sunset Boulevard malt shop, where she'd gone after skipping a typing class at Hollywood High School. A few months later, at the age of 16, she was signed to a personal contract by Warner Bros. director Mervyn LeRoy, who took her with him when he moved to Metro-Goldwyn-Mayer in 1938. Turner attracted attention in her first film, LeRoy's They Won't Forget (1937), and she later starred in featured roles, often as an ingenue. In 1939, her auburn hair was bleached blonde for a film at MGM, and she remained blonde for the rest of her life, except for a few film roles. She was also well-known in her heyday as the Sweater Girl of the screen.

During the early 1940s, she established herself as a leading actress in several films, and her reputation as a glamorous Femme Fatale was enhanced by her performance in the Film Noir The Postman Always Rings Twice (1946). Her popularity continued through the 1950s, in such films as The Bad and the Beautiful (1952) and Peyton Place (1957), the latter of which she was nominated for an Academy Award for Best Actress. Media controversy surrounded Turner in 1958 when her daughter Cheryl Crane stabbed Turner's lover Johnny Stompanato to death in their Beverly Hills home; a coroner's inquest concluded that Crane had acted in self-defense.

Turner's next film, Imitation of Life (1959), proved to be one of the greatest financial successes of her career, but onward from the early 1960s, her roles were fewernote Part of the reason was that she'd negotiated 50% of the profits from Imitation of Life, and the film made her over $2 million, allowing her to work less.. Turner spent most of the 1970s and early 1980s in semi-retirement, only working occasionally until 1985, and died from throat cancer in 1995, aged 74.

Lana Turner films with pages on TV Tropes include: