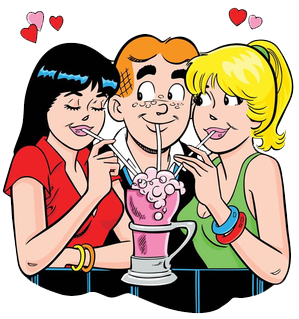 Sometimes, Betty and Veronica stop fighting over Archie and simply enjoy him together.
"I think the three of us could be very happy together."
— Shawn, about himself, Cory, and Topanga, Boy Meets World
Advertisement:

Subtextual implications in the story, about the possibility of a shared romantic and/or sexual relationship between three characters. This can involve an Official Couple (or as close to an official couple as you can get) and their best friend, the participants in a Love Triangle (or more) being far more friendly than you'd expect, a Power Trio with a close emotional bond, or just any trio of characters that, by the nature of their relationship and/or the plot, spend an awful lot of time around each other.

Like most other Ship Tease tropes, it might be caused by the author fooling around, with the expectation that no one will consider this a serious romantic resolution, or by teasing the fans of that particular kink to stay tuned. It's possible for this to be accidental, though given the generally more complicated dynamics involved it's more likely to be intentional compared to other subtext tropes.