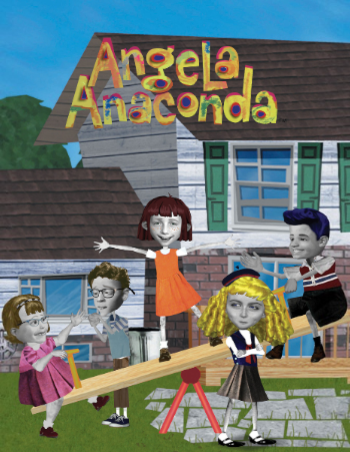 "My name is Angela, hey hello! Welcome to my very own show!"
Advertisement:

Angela Anaconda was a Canadian-American Animated Series starring, well, the title character. The imaginative Angela Anaconda and her friends, Gina Lash, Johnny Abatti, and Gordy Rhinehart, go to school with Nanette Manoir and her Girl Posse, and get into all sorts of wacky hijinks. The series lasted from October 1999 to November 2001 with a total of 65 episodes.

How's this show different? Well, there's the Clip-Art Animation (everyone is animated as a black-and-white cutout). There's also the fact that Once an Episode, Angela would go into a long Fantasy Sequence, which usually involves her taking out her frustrations about the episode's conflict by putting her enemies (most often Nanette) through a Humiliation Conga, or her bemoaning the troubles she's gotten herself into and imagining what terrible things might happen to her next, or simply describing her current situation through an imaginative metaphor, or a combination of any of those three.

Interesting to note, Angela Anaconda actually started off as a series of animated shorts on Nickelodeon's KaBlam!. When it was developed into its own show, it ended up airing on what was then Fox Family in the U.S. When Disney bought Fox Family and changed the network entirely, reruns returned to Nickelodeon (which also aired the show internationally). Funny enough, another KaBlam! short, Untalkative Bunny, was later adapted as a full TV series, which also aired on Teletoon in Canada.

Another interesting note is that one of the animators was Ian D'Sa, who is recognizable to Canadian rock fans as the guitarist and backup vocalist for Billy Talent. The show was also co-created by Sue Rose, who previously also created Pepper Ann for Disney's One Saturday Morning.

And now, to today's tropes! Starring me, and NOT starring Nanette Manoir!:

Mr. Enter points out that Angela's fantasy of her ordering her enemies at a cannibal restaurant is a sign that she is in fact, a sociopath.

Mr. Enter points out that Angela's fantasy of her ordering her enemies at a cannibal restaurant is a sign that she is in fact, a sociopath.