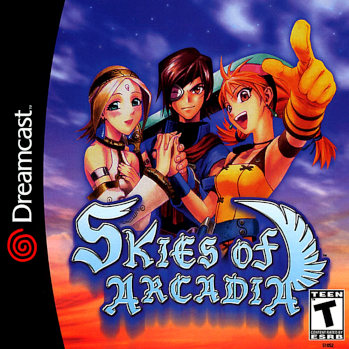 The age of exploration has dawned upon the world of Arcadia. Brave adventurers set sail across the vast skies in search of treasures untold. And, where there is treasure, there will be Air Pirates...
Advertisement:

Skies of Arcadia is a Role-Playing Game for the Sega Dreamcast, featuring pirates who sail the skies rather than the seas.

Vyse and Aika are two young and eager pirates flying under the flag of the benevolent Blue Rogues, virtuous bandits who only target the bloated and corrupt Valuan Empire. Rounding out the main trio is a Mysterious Waif called Fina, who was captured by Imperial troops while on a quest to recover the six Moon Crystals that have been scattered throughout the floating islands forming Arcadia. Of course, the Valuan Empire are also after the gems for their own purposes: they act as ignition keys to six ancient, almighty colossi that hold enough firepower to easily Take Over the World.

The game received an Updated Re-release for the Nintendo GameCube called Skies of Arcadia Legends. It reduced the random encounter rate to a more sensible level (and increased the XP rewards accordingly), added in new Bonus Bosses, Discoveries and Sidequests, and inserted the content that was originally tied to the Dreamcast's VMU minigame.

It also received a manga adaptation, which keeps the game's core story elements, but also takes some creative liberties as well; Vyse is also a lot more reckless, and Fina is more angsty.

While a revival is still up in the air, Sega hasn't forgotten about the game; they've made the full soundtrack available on Amazon and Spotify, cameo versions of Vyse, Akia, and Fina were playable characters in Valkyria Chronicles, and Sonic & All-Stars Racing Transformed included Vyse as a playable racer and a track based on Arcadia's airships and floating islands.