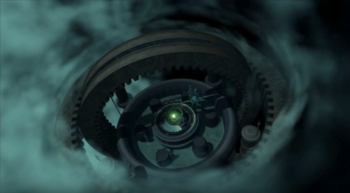 Solid walls are so overrated.
"The voyage to Inazuma is a treacherous one. You will be plagued by a perpetual tempest the entire trip. In fact, the relentless rain and wind are also an embodiment of the Raiden Shogun's will to close the nation."
—Kaedehara Kazuha, Genshin Impact
Advertisement:

Weather is one of the strong driving forces on Earth (or any planet with an atmosphere for the matter), so what happens when someone takes advantage of that to conceal some important place that they don't want other people finding out?

The answer is to form a literal storm barrier around the location, usually in the form of a hurricane, tornado, or some other cyclonic vortex. Occasionally, the "storm barrier" here is part of the place's natural phenomena, which someone gets to take advantage of.

These vortex barriers tend to have winds far stronger than any recorded natural storm, and will often be accompanied with intense lightning strikes and flying debris for good measure. Anyone who dares to try and penetrate the vortex will likely not live to tell the tale, as they get tossed around by the winds, get bombarded by debris and possibly get zapped by lightning. Because of this, brute force is not always the answer to see what lies inside. By contrast, the location inside the vortex is very calm, like being inside the eye of a hurricane.

Usually, the heroes will try to find a way to get inside without having to resort to dangerous dive-ins. If the vortex is artificial and is controlled by a Weather-Control Machine of some kind, or is powered by someone with Weather Manipulation abilities, then the common solution is to destroy the device or defeat the being to turn the vortex off. Other ways include finding a safe opening in the vortex to pass through (which is usually at the very top where the "eye" opening is visible), and using specialized protective gear to withstand the full brunt of the storm without injuries.

They may also come in sandstorm, blizzard, and whirlpool variants, depending on the climate and region.

May overlap with Perpetual Storm, as these vortexes tend to be really unusual in their own right and often last longer than natural storms. Often the case of Hostile Weather and Weird Weather. Compare Deadly Dust Storm, a dust/sand storm with devastating effects, which can be one of the forms that this trope takes. See also Braving the Blizzard for the snowstorm variant and Mega Maelstrom for the whirlpool variant. In video games, if the vortex itself makes up an entire level to show the arduous journey through, then it may overlap with Gusty Glade and Funnel Cloud Journey.