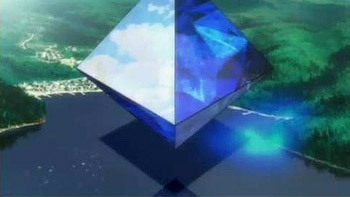 Ramiel: 1d8 times as powerful as any other Angel.
"The silver sphere is about twice the size of a billiard ball. It has a couple of very sharp hooks built into it. It flies through the air, attaches itself to your forehead, and digs in. Then a drill comes out and pierces your skull right above the bridge of your nose, while blood spurts out the other end. I hate it when that happens."
— Roger Ebert summarizes Phantasm II
Advertisement:

Large geometric artifacts are unnerving. They are unfamiliar and inhumanly perfect. Visual artists use these common reactions to convey a sense of the unknown and the sinister.

While humans could theoretically build perfectly spherical or other large mathematically perfect geometrically objects and devices, it remains a thing we have never actually done historically,note  The Pyramids of Egypt come reasonably close, and as per this trope, visitors have found them awesome and mysterious for millennia. Of course, the Egyptians invented geometry. and even with modern technology it still would be a ridiculously difficult undertaking. Even with modern technology such devices seem more than foreign: they seem not of this world.

The lack of visual cues is another source of fear. A giant cube in space does not look like a spaceship; it could be anything. It could be a massive bomb, or a toy, or a probe. Consider The Monolithnote Which is a subtrope from 2001: A Space Odyssey: it is the ultimate unknown.

This feeds into the reputation for evil that accompanies aliens that have geometric bodies, large or small.

There are exceptions. Very large Ringworld style objects are geometric for merely physical reasons. The same is generally true of recognisable space stations and large regular spaces such as hollowed asteroids.

No relation to Companion Cube... usually.