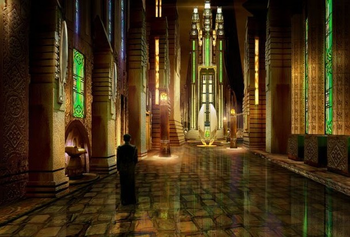 What could have been

Uru Online, and is now in Myst Online.
"And so we return again to the holy void. Some say this is simply our destiny, but I would have you remember always that the void exists, just as surely as you or I. Is nothingness any less a miracle than substance?"
— Sister Miriam Godwinson, “We Must Dissent”
Advertisement:

A setting that lacks a background and supporting characters, often in a deliberately jarring fashion. A Beautiful Void will often be exactly what the name implies: beautiful, yet somehow also a wasteland, often with a touch of After the End thrown in for good measure. Typically, the reason why the obviously vibrant world is so deserted and empty will be mysterious, but this may vary depending on medium and plot. Named for Douglas Adams' description of Myst. Stories set in this trope tend to have major philosophical aspects. Often coexists with Ontological Mystery.

Wistfulness is an important factor. Overlaps with Scenery Porn/Gorn.

A similar effect can be used to evoke fear, as well - see Nothing Is Scarier, It's Quiet… Too Quiet, and Ghost City.