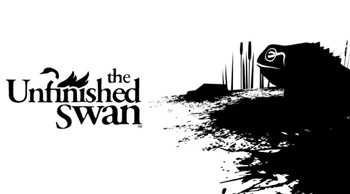 The Unfinished Swan is a first person puzzle platformer created by Giant Sparrow, released on October 2012. Initially released exclusively for PlayStation 3, PlayStation 4, and PlayStation Vita through the Play Station Network, it was eventually released onto PC via Steam and Epic Games Store in September 2020.

In it, you play as Monroe, a young boy whose mother has recently died, leaving behind hundreds of paintings she made but never finished. The orphanage allowed him to take one of these paintings; he chooses one of a swan missing part of its neck. One night, he finds the swan has gone missing, and chases it through a door he has never seen before and enter a strange, surreal world with huge swaths of unfinished white space. Using globs of black paint to splatter and reveal your surroundings, you must make your way ever forward hunting the titular swan.

The gameplay is puzzle and exploration based, with throwing different forms of paint or water making up the core gameplay mechanic. Power-ups can be bought to give you a hose effect, a straight-line effect, and the ability to pause time for the balls in the air, allowing you to throw multiple balls at the same time.