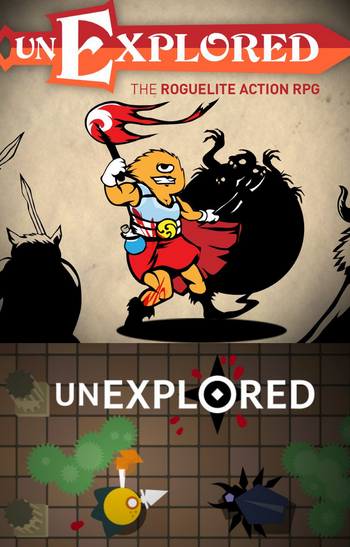 Unexplored is a 2D top-down action Roguelike, developed by Ludomotion. It was initially released into Steam Early Access on 9th August, 2016, with a full PC release on 22nd February, 2017.

It then received Mithril Run, Ripley Run and Dark Ritual DLCs, which altered the level designs with The Lord of the Rings, Alien and Lovecraftian themes, respectively. The Unlocked Edition of the game containing all three DLCs was then ported onto Nintendo Switch on August 9th, 2018, with Playstation 4 and Xbox One ports following on February 19th, 2019, and February 22nd, 2019, respectively.

The game is heavily inspired by Brogue. However, it is fully real-time rather than simultaneous turn-based. Moreover, its key selling point is "circular" dungeon generation, where each floor loops organically around a point of interest at its core, rather than being a simple collection of rooms and corridors like in most classical roguelikes.

Unexplored 2: The Wayfarer's Legacy has been announced for 2020.