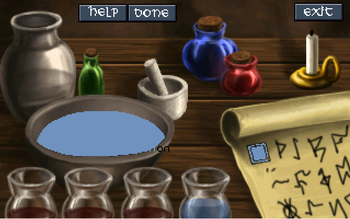 Many fantasy video games include consumable Magic Potions, and some of them allow the player to mix their own potions (or poisons) of various effects in a process vaguely inspired by real-life Alchemy. Said process generally takes place in a mini-game revolving around mixing proper ingredients in just the right proportions, because Alchemy Is Magic and Magic A Is Magic A. Mixing the wrong ingredients usually wastes them, with several optional mechanics thrown into the mix:

What rarely comes into consideration in such mini-games is the issue of timing and time costs in general, so the player can often turn mounds of raw materials into a small drug store worth of potions within seconds of in-game time. Likewise, the idea of the Philosopher's Stone, which was arguably the whole point of real-life alchemy, is rarely associated with it in games.

A subtrope of Item Crafting. See also Game Gourmet. May overlap with Just Add Water when the process isn't detailed and requires fewer items than are logically needed.