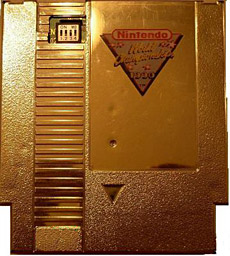 Nintendo World Championships was a video game on the NES named after the competition of the same name, which in turn was based on the one in The Wizard. The cartridge contained three NES games.

The Championship Mode in NES Remix is a composite of this game and Nintendo Campus Challenge 1991, replacing the Rad Racer and Tetris challenges of the former with the latter's Super Mario Bros. 3 and Dr. Mario challenges.