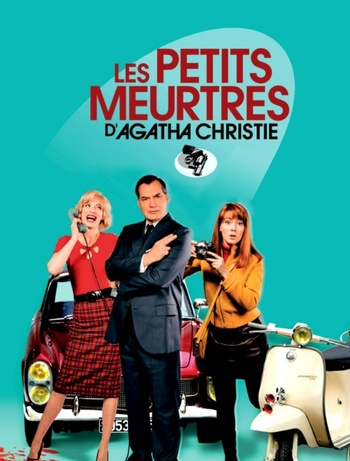 Les Petits Meurtres d'Agatha Christie is a French TV adaptation of Agatha Christie's murder novels and short stories. The stories are set in 1930s (and 1950s in the second era) Northern France.

The series has two sets of main characters and era: Commissaire (equivalent of DCI in Britain) Jean Larosière and Inspecteur (DI) Emile Lampion in 1935-1939, and Commissaire Swan Laurence and reporter Alice Avril in 1955-1962. The setting update was made when the two actors playing Larosière and Lampion left the series. There are 11 90-minutes-long episodes in the first era and 16 (so far) in the second.

The show comes from a 2006 TV adaptation of Hercule Poirot's Christmas, called Petits meurtres en famille, for which the characters of Larosière and Lampion were created. They proved so popular that the producers decided to continue telling stories with them. While Petits meurtres en famille has some Early Installment Weirdness (it happens in 1939, in Brittany instead of Northern France, and it's the first time Lampion works with Larosière), the ending (with Larosière being unmasked as the murderer and an illegitimate son of the old man who was killed) makes it fall squarely into Continuity Snarl.

The series in general provides examples of the following tropes: