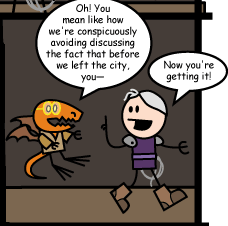 "When there is a plan, things cannot go according to it. If they do, the plan becomes a spoiler."
— How NOT to Write a Novel
Advertisement:

The chances of The Plan succeeding are inversely proportional to how much of the plan the audience knows about beforehand.

As corollaries, you can ensure A Simple Plan's success by making it an unspoken plan, and guarantee failure by telling the audience the full details of the Zany Scheme. Expect to hear the phrase "I've got a plan" spoken by one of the characters with no further explanation before the cut to the next scene. Explaining The Plan after it's been carried out is optional.

This, by the way, is why heroes always manage to thwart the villains' Evil Plan. The villains always insist on boasting about their evil plan and how exactly they're going to pull it off.

Admittedly, the reason for revealing only failed plans to the audience is obvious. There's no drama in something going wrong if no one knows what was supposed to happen. Conversely, where's the drama in seeing exactly what you were just told would happen? The only exception is when the plan is Crazy Enough to Work; when every bullet point could go horribly wrong, then each success is a big, suspense-building deal. As a general rule of thumb, if things do go according to how the audience is told, you can expect that the characters are walking into a trap.

This often overlaps with The Law of Conservation of Detail — if a character mentions what they intend to do, rather than just letting us see what they do, it must be because their intention is relevant — which means that their intention and what actually occurs are different.

If the characters are keeping the plan a secret in-setting (rather than merely not letting the audience in on it), authors have a number of justifications handy. Perhaps the hero's allies are under enemy surveillance, or the bad guys can read minds. Perhaps they have other methods for making people talk. Maybe somebody on your team might be an enemy agent. If so, the only way to keep your opponents in the dark is to lie to the people on your side about what the plan is, or not tell them the plan at all.

A few other justifications include:

Related to the above, there are a few snags that can crop up when this appears in a video game — since the audience is also often one of the executors of the plan, and giving a player a scenario to clear without telling them what they're supposed to do to clear it is a fast way to really annoy players.

See also Obstacle Exposition, Gambit Roulette, "I Know What We Can Do" Cut, Despite the Plan, Impossible Mission Collapse, This Is No Time for Knitting. This rule is sometimes violated as a form of Padding. If you want the plan to succeed the way it's explained, consider the Unfolding Plan Montage. Contrast Million-to-One Chance, where a plan is spoken of, expected by others to fail, yet succeeds.