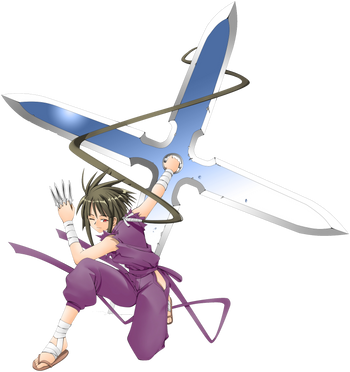 Luckily it folds up for easy storage.
Advertisement:

A shuriken (throwing star) which is really, really big. Fuuma literally translates as "wind demon" and is taken from the name of a famous Ninja clan. Mostly used by ninja for thematic purposes, despite it having lost the quality which made it useful to them in the first place. Can sometimes be folded for easier storage.

Doubles as Non-Indicative Name, since "shuriken" literally means "blade in the hand".

A Sub-Trope of Stock Ninja Weaponry, Bigger Is Better, and Impossibly Cool Weapon (try to use it without cutting yourself in two).

Not to be confused with Fuuma Kotaro (though he has wielded them in fiction).