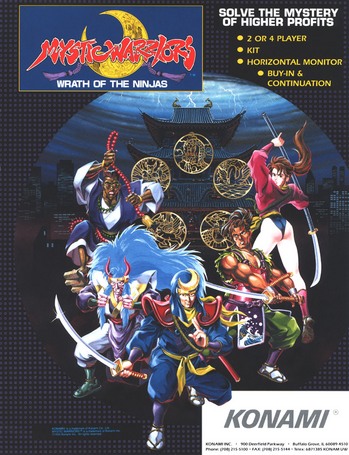 Mystic Warriors: Wrath of the Ninjas is a side-scrolling Action Game by Konami released exclusively for the arcades in 1993. It's a Spiritual Successor to Sunset Riders, except with ninjas.

In a futuristic Dystopia, an evil corporation by the name of Skull Enterprises has taken over Japan and is about to Take Over the World. All that stands between them are a Five-ninja Team who are targeted by Skull forces: Spyros, an American Ninja; kabuki warrior Keima; Kojiro, a Samurai; street smart African American Buddhist monk Brad; and Yuri, a kunoichinote female ninja. However, the game can only support up to four players. This is because one of the cast members is captured at the beginning of the game and most of it is spent rescuing him or her from certain death.

TV Tropes will never get away with this... Let him go!
Feedback

Yuri can potentially end up becoming one, necessitating at least one of the boys to save her.

Yuri can potentially end up becoming one, necessitating at least one of the boys to save her.