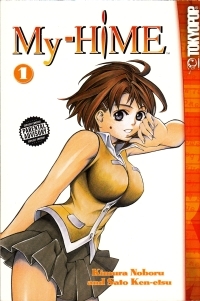 Yuuichi Tate is an Ordinary High-School Student transferring in to the new school of Fuuka Gakuen. As he rushes to avoid being late for his first day at the new school, he comes upon the sight of two girls battling each other — and using decidedly supernatural powers to do so. As he stands there gawking in amazement, one of them notices him and demands to know what he is doing there — shortly before her close proximity to him creates a reaction of some sort that leaves them both stunned.

And thus Yuuichi ends up getting roped into the world of the HiMEs, girls with the ability to wield magical weapons called "Elements", and with their "Key" present, the ability to summon giant beasts known as "Childs". These are used in their battles to protect the school (and by extension the rest of the world) from monstrous creatures known as "Orphans", and their creator, the wicked boy Nagi Homura. As the "Key" to the two dueling girls, Mai Tokiha and Natsuki Kuga, Yuuichi's life has just become a whole lot more complicated.

The manga version of My-HiME was conceived as an Alternate Continuity to the anime counterpart, with most of the characters having noticeably different backgrounds and personalities. While it has never managed to achieve the popularity of its anime counterpart, it nevertheless has a cult following. The series is available in paperback in North America, licensed by Tokyopop.

The manga shares a majority of tropes with the anime. Below are several that stand out within the manga itself:

The My-HiME manga provides examples of the following tropes: