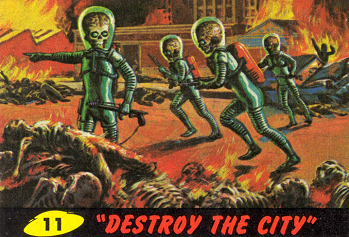 "Don't run. We are your friends!"
"DESTROY ALL HUMANS!"
— Orthopox in er... well, Destroy All Humans!

Some days, it really sucks to be H. sapiens.

There are many reasons why you might wish to kill all humans. Maybe they're all horrible cruel monsters and one of them killed your mommy. Maybe their status as the dominant intelligent species on the planet is preventing your own kind from taking their place. Maybe some human colonists wronged your ancestors, and your people have generalized their rage and hate to cover the whole species. Maybe you were raised from infancy/the egg/the spawning pond to view humans as Always Chaotic Evil. Maybe out of spite or a peculiar sense of duty, you just can't stand the thought of humanity existing one second longer. Heck, you could just be trying to save the rest of the planet's species from extinction. You could even just be a dick. But the verdict is certain, and you're not wavering: They've all gotta die. Every... last... one....

That is, assuming you even have a comprehensible reason. You could just be conveniently attracted to the creatures on screen most sympathetic to the audience, a Killer Robot out to destroy, or an Omnicidal Maniac Eldritch Abomination. Or, simply, mere apes have no hope of comprehending your motives.

Sentient computers also seem to inevitably arrive at the conclusion that humans as a species must be killed. Sometimes, it's a product of them being too machine-like, and concluding that if one human is observed doing something that may harm the computer, then they all are a threat that can only be reconciled by killing them all off. Otherwise, it's a case of them being too human and flying into a blind rage triggered by jealousy, fear, or maybe even spite. Other times (such as in the film version of I, Robot) the supercomputer may start to become homicidal in an attempt to bring order to the world and protect humanity from itself. Rarely does a supercomputer decide that it should coddle humans to get them to keep supplying it with electricity and spare parts. Only the Robot Buddy seems to favor this tactic.

A recommendation of How to Invade an Alien Planet, it frequently ties in with Apocalypse How and The End of the World as We Know It.

Not to be confused with the video game Destroy All Humans!, although it obviously fits the definition, as killing all humans is the whole point of that game.