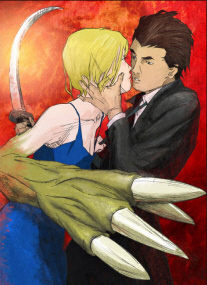 Kemonozume (ケモノヅメ, "Beast Claw") is an anime series from Madhouse written and directed by Masaaki Yuasa. Broadcast on WOWOW from August 5th, 2006 to November 5th, 2006, the show consisted of thirteen episodes.
Advertisement:

The story involves the existence of a race of flesh eating creatures called Shokujinki (食人鬼, Man-Eating Ogres), they remain hidden among human-kind while feasting on them secretly. A martial-arts styled school known as Kifuuken (鬼封剣, Ogre-Sealing Sword) was founded to combat the menace, training and arming combatants to face the Shokujinki threat, with the teachings formerly passed down through the Momota family. The story follows the forbidden romance between Toshihiko, the latest heir of the Kifuuken school and Yuka, a young woman who is one of the monsters.