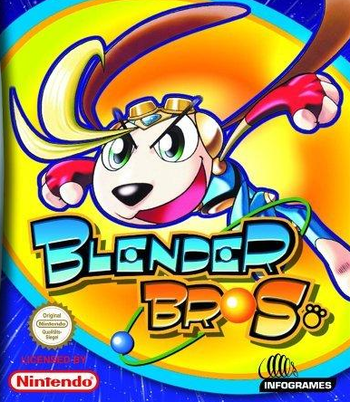 Blender Bros. is a 2001 video game developed by Hudson Soft and published by Infogrames. It was one of the earliest games released on the Game Boy Advance and was fairly well-regarded during those early days, but it fell into obscurity as the Game Boy Advance's library expanded.
Advertisement:

In the far, far future, the world is full of both humans and anthropomorphic animal people called Animalmen. A group of Animalmen known as the Cosmo Keepers seek to keep peace in the galaxy, while another group known as the Zooligans causes trouble. Unfortunately, that's about all the story you'll get from the game itself, since most of its background story was only released in tie-in comics in Japan. The main hero is Blender, a dog/rabbit with radar-powered ears who makes it his mission to stop the evil Zooligans. He has the support of his fellow Cosmo Keepers and a group of adorable beasts called Mini Bros who grant him special powers.

The game is a platformer where Blender must travel across seven different planets to stop the Zooligans in their evil scheme to cause chaos in the galaxy. The game is notable for being one of the earliest platformers to use a mechanic where you can travel between the foreground and background of levels. The levels themselves also utilize a number of different styles, with some entire levels being Racing Minigames and one whole world being a gigantic Timed Mission. You can also customize Blender's abilities with different Mini Bros, which grant him skills such as a more powerful attack, the ability to walk on water, or a powerful dash. Most sidescrolling levels contain a new Mini Bro, and they can even be evolved to unlock even more special skills.

In August 2020, Piko Interactive re-released the game on Steam.