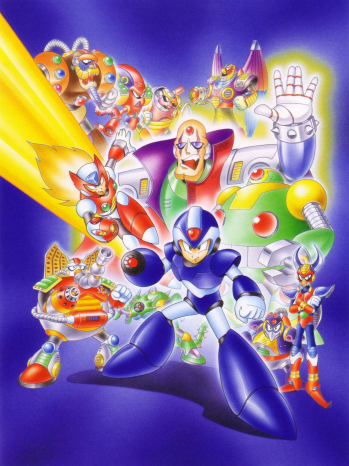 Mega Man X is the first entry in the Mega Man X series, released on the Super Nintendo on December 17 1993 in Japan, January 1994 in North America, and May 1994 in Europe.

The game is set in 21XX, after scientist Dr. Cain discovered a robot sealed away in a capsule left by the late Dr. Light; one capable of advanced AI and even free will. Dr. Cain studied the robot, known as X, and attempted to duplicate his functions. The resulting Ridiculously Human Robots became known as Reploids.

Having free will, some of the Reploids began to go rogue, and were thus branded "Mavericks." To counter the threats of Mavericks, a law enforcement group known as the Maverick Hunters, led by Sigma, were formed. Of course, then Sigma himself goes Maverick, taking many of the Hunters with him to lead an anti-human rebellion. X, feeling responsible for the chaos and desperate for peace, heads into battle alongside the Maverick Hunters' ace Zero to stop Sigma.

It was later remade as Mega Man: Maverick Hunter X for the PSP.