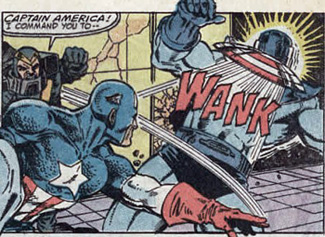 A Sub-Trope of Throwing Your Sword Always Works and Improbable Use of a Weapon, a shield is thrown at a target. Varies from just hitting to slicing.

In truth, normal shields are often far too large, heavy, and aerodynamically inept to be thrown effectively, and most of the time don't return to the user, so your major defensive tool is now halfway across the room. In fiction, Applied Phlebotinum, Acceptable Breaks from Reality, and Rule of Cool can be thanked for this actually working.