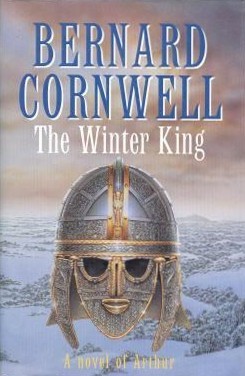 "Once upon a time, in a land that was called Britain, these things happened."
"These are the tales of Arthur, the Warlord, the King that Never Was, the Enemy of God and, may the living Christ and Bishop Sansum forgive me, the best man I ever knew. How I have wept for Arthur."
Advertisement:

The Warlord Chronicles (also known as the Warlord Trilogy, the Excalibur Trilogy, etc.) are a series of books by Bernard Cornwell that retell the Arthurian Legend in a fashion that is much closer to being historically accurate than the traditional legends, although many of the additions that were added to the original Celtic legends (such as Merlin and Lancelot) are still present and used in interesting ways. The series deals with war, religion and politics in post-Roman Britain in an unflinching way.

The story begins in a remote monastery, many years after the fall of Arthur. Queen Igraine comes to the old monk Derfel, who was once one of Arthur's lieutenants, to get him to tell her the story of Arthur, so that it will not be forgotten. Reluctantly at first, Derfel begins telling the story of Arthur as he experienced it, as he rose from a simple spearman to one of the most trusted warriors and leaders under Arthur's command. Here is how his story begins:

Britain, 480AD. Two generations have passed since the Romans left, and things look bleak for the native (Celtic) Britons. The Saxons are on an inevitable drive of conquest from the east, while Irish raiders attack from the west to steal, plunder, or carve out their own kingdoms. The many kingdoms of the Britons spend much of their time feuding and fighting with each other over territory and the ambitions of their kings and princes. Inside these kingdoms, the opposing religions of Christianity and the old British gods as worshipped by the Druids (almost wiped out by the Romans, but seemingly making a comeback under the influence of Merlin) jostle with each other and vie for the hearts and minds of kings, warriors and the ordinary people.

For the Britons, the only bright spot is the fragile alliance against the Saxons, held together by the High King Uther of Dumnonia. Alas, even that seems like a lost hope because Uther, once a fearsome warrior, is a dying old man. With no legitimate adult heir (his son having recently died in battle), Uther has refused the advice of nearly everyone by insisting on naming his newborn grandson Mordred as his heir rather than his bastard son Arthur (whom he blames for his son's death), despite the fact that Arthur is already gaining fame as a warrior from his exploits. Instead, Uther declares a number of other major figures to be guardians, stewards and regents for Mordred until he comes of age. He dies soon afterwards, and the ambitious lords and priests are soon scheming and competing to gain a greater share of power for themselves. Returning from Brittany, Arthur tries to sort out the mess out and build an alliance to keep the Saxons from conquering all of Britain. He nearly undoes his own efforts, though, when he breaks off a politically powerful arranged marriage in order to marry Guinevere, throwing the British kingdoms into chaos.

Even after Arthur clears these early hurdles, many dangers still await. Friends and lovers have a way of turning into enemies, religious differences continually threaten to rip Britain apart, and there are very troubling signs around young Mordred as he grows older...

A TV series adaptation of the first book, also called The Winter King, was announced in 2020 for the ePix channel.