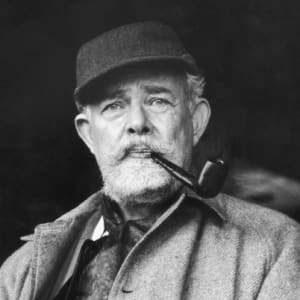 "I would recommend a solo flight to all prospective suicides. It tends to make clear the issue of whether one enjoys being alive or not."
Advertisement:

He was born in Bombay India, the only child of a district police superintendent and the daughter of a judge. White's childhood was very unhappy due to his parents' turbulent marriage which ended in bitter separation. His mother was a particularly cruel woman who would abuse or smother her son depending on her mood. Like many British children of his class, White went to a Boarding School of Horrors — the experience gave him views on what education should not be, something which he reflected in his writings.

He graduated from Cambridge College with a First Class degree in English with distinction. Afterwards he spent six years working as an English teacher before the success of his writing allowed to resign his post and devote himself full-time to writing.

In 1938, he was published the book that would begin his legacy, "The Sword in the Stone" — a prequel to Le Morte D Arthur, focusing on King Arthur's childhood. His version of Merlin, or as White dubbed him Merlyn was in many ways based on himself. It was so successful he began writing more books about King Arthur's reign: The Witch in the Wood (1939), and The Ill-Made Knight (1940). By this time White had move to Ireland for tax reasons, but the outbreak of World War II effectively stranded him there for its duration.

White was thoroughly disgusted by the immense cruelty of the War, and let it be known in his books. He wrote two more King Arthur books: "The Candle in the Wind" and "The Book of Merlyn", and revised the first three books to reflect his pacifist sentiments. He sent the five books to his publisher to be published in one volume — The Once and Future King. His publisher disagreed on the basis that the wartime paper shortage and the pacifist sentiments would prevent the book's publication. It would be published as a tetralogy in 1958. "The Book of Merlyn" would not be published until after White's death.

"The Once and Future King" proved to be an immense success on it's publication. Two years after it was published, Alan Jay Lerner and Alex Lowe adapted it into their musical, Camelot. After the war, White moved to Alderney of the Channel Islands and began writing at a slower pace.

White never married and it was speculated he was gay. He had a few friends, but he usually preferred solitude save the company of his beloved Irish setter.

White died on a ship returning from a lecture tour in 1964, at only 57 years old. He was buried in Greece, which is ironic since of his early successes was entitled "England Have My Bones".

White had an immense influence on the fantasy genre, and "The Once and Future King" is regarded as a bona fide fantasy classic. Peter S. Beagle freely used White's anachronistic style for his own fantasy classic, The Last Unicorn. J. K. Rowling proclaimed that his version of Merlyn was her influence for Dumbledore and Wart for Harry Potter. Other fantasy heavy-weights like Neil Gaiman and Terry Pratchett have all been influenced by T.H. White in one way or another.