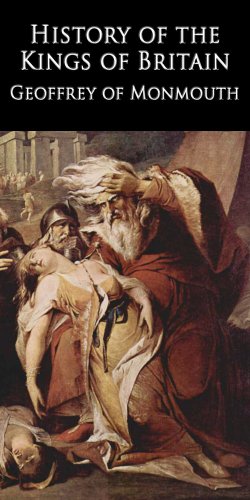 "A writer has emerged who, in order to expiate the faults of these Britons, weaves the most ridiculous figments of imagination around them, extolling them with the most impudent vanity above the virtues of the Macedonians and the Romans..."
William of Newburgh, History of English Affairs (c. 1198 AD)
Advertisement:

Historia Regum Britanniae, or History of the Kings of Britain, is a work by Geoffrey of Monmouth from around the 12th century. This work is notable for kickstarting British history, with some Artistic License taken to fill in the blanks Geoffrey couldn't get from Bede or other sources. For a long time, it was considered a Universe Bible for British History in the Middle Ages, with some hints of propaganda. It can be considered a founding myth for several ethnic groups in Britain.

After a brief introduction the history of the Britons starts around The Trojan War after which Brutus, a great-grandson of Aeneas, sets sail with a group of his people to found a new empire, which happens to be Britain.

The most lasting legacy of Geoffrey's Historia is the invention of King Arthur and Merlin in the form that became canon throughout the Middle Ages and that we can still recognize today. Two other figures from the book that are still known today by way of William Shakespeare's dramas are King Lear (Leir) and Cymbeline (Kymbelinus).

In his outline of British history, Geoffrey largely follows the three hundred years older Historia Brittonum, though he provides a lot more material.

The book can be found here

if you want to read it. Your local bookstore probably has a copy as well.

Alternative Title(s): History Of The Kings Of Britain