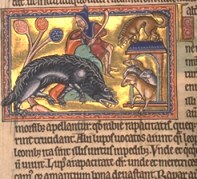 From the fall of Rome during the 5th century (c. 476 CE) to the invention of printing. The precise dates vary from region to region, but this was a time when literacy was low and books rare. Most western folklore originated here, often echoing earlier tropes. Chivalric Romance developed in this era.

Note: this is older than Johannes Gutenberg's printing press (1439 CE), not metal movable-type characters (ca. 1230 CE, Korea), movable-type printing (1040 CE, China), and certainly not wood-block printing (220 CE or earlier, China again). In short, the Middle Ages — assuming you don't take Petrarch's definition for it, as he lived in the 1300s. Even all things Shakespeare, Don Quixote, and many late medieval and high Renaissance era books are only Older Than Steam.

Specific works from this time period include:

Tropes from this time period: