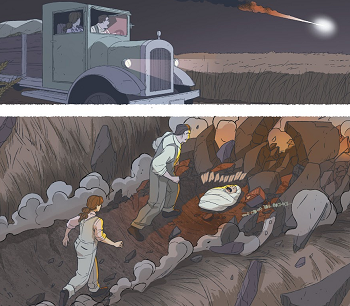 When alien life forms land on Earth, the first specimen of intelligent life they are likely to encounter is a rural farmer. This farmer is likely to be equipped with a firearm, and is equally likely to threaten the trespasser in a (futile) attempt to scare it off. While usually Played for Drama, it can be Played for Laughs if the farmer is especially unlikeable or foolhardy.

Alternatively, the farmer may not be instantly attacked. Sometimes the aliens are quite peaceful, and only interested in an intelligent dialogue or asylum on Earth.

Usually justified in that farmland usually covers a significant area of most countries. If an alien lands away from cities or suburbs, there's a good chance that the first person they'll come across is a farmer.

Related to Crop Circles and Came from the Sky.