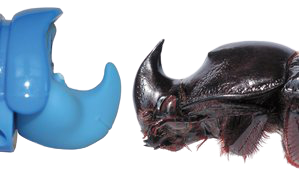 Left: Dim, a character from A Bug's Life (1998).
Right: Megaceras briansaltini, a rhinoceros beetle discovered in 2006.
"It just goes to show how diverse ancient mammals are, that we can just imagine some bizarre critter and later find something just like it."
— Guillermo Rougier on the similarity of Cronopio dentiacutus to Scrat.
Advertisement:

Accidentally Correct Zoology happens when a fictional species is made up for a work, or a fictional animal quality or ability is, only for a real example resembling it to be discovered later on. The animal or other organism should first appear in a work of fiction, without the author believing that it actually exists, to count. What was once thought to be Artistic License – Biology is later confirmed by science to be real.

Compare Real After All, an in-universe counterpart where a creature that is considered a myth or superstition is revealed to really exist in the universe of the work. Also compare Right for the Wrong Reasons, where someone coincidentally arrives to the right conclusion despite being mistaken about the facts, and Reality Is Unrealistic, where someone might believe something doesn't exist or is incorrect despite actually being real.

A subtrope of Accidentally Correct Writing. Not a Subtrope of Defictionalization unless the real-life species or breed is a result of artificial selection or genetic engineering that is inspired by fiction. Contrast Science Marches On, where new discoveries prove assumptions or even previously admitted certainties wrong.