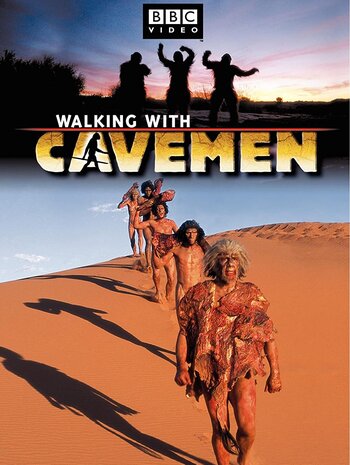 Walking with Cavemen is the 2003 series of the Speculative Documentary franchise Walking with Dinosaurs. Focusing on the evolution of the human race, the series spans over the past three million years to show how early hominids first began to walk upright, create tools, and shape the world around them. Unlike other instalments in the franchise, Cavemen uses actors in make-up and prosthetics to portray humanity's early ancestors; although CGI and animatronics are still used to depict other species. It is also the only main entry in the franchise to have an onscreen host present; Robert Winston in the original cut and Alec Baldwin for the American release. A cut exists that brings it more in line with the others in the franchise, but with Andrew Sachs narrating instead of Kenneth Branagh and combining the first and second episodes and the third and fourth respectively. This cut is available on the ''Prehistoric Earth: A Natural History" DVD set.

Each episode focuses on a different point in the evolution of the human race and details how certain species contributed to how modern humans behave: