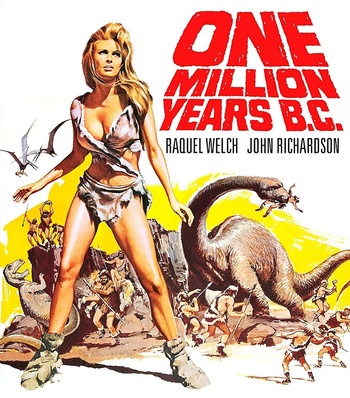 One Million Years B.C. is the better-known 1966 Hammer Film Productions remake of 1940's 1 Million B.C., which was the Trope Namer for the 1 Million B.C. image of cavemen, dinosaurs, ape-men and other real and made-up creatures of the past duking it out in a volcano-scarred landscape. The film provided a showcase for Ray Harryhausen's stop-motion effects, as well as Raquel Welch's physique in her iconic Fur Bikini.

The story begins with the brutish Rock Tribe, where Tumak (John Richardson) makes a failed attempt at displacing his father, Akhoba (Robert Brown) as alpha male and is banished into the wilderness as a result. After escaping various predators and collapsing from exhaustion, he's rescued by Loana (Welch), whose Shell Tribe is somewhat more civilized and technologically advanced. Tumak's culture clash with the Shell Tribe eventually drives him and Loana back to his own people, where he has to contend with his jealous brother for leadership.

The film was the first in a Thematic Series from Hammer. It was followed by Prehistoric Women in 1967, When Dinosaurs Ruled the Earth in 1970 and Creatures the World Forgot in 1971.