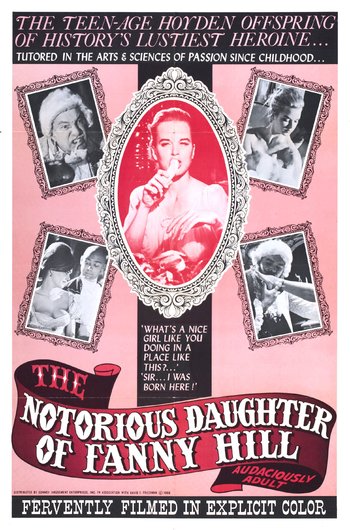 The Notorious Daughter of Fanny Hill is a 1966 sexploitation film directed by Peter Perry Jr., and starring Stacey Walker.

Miss Kissey Hill, daughter of now late notorious 19th century high-class prostitute Fanny Hill is walking in her mom's footsteps and has an even more notorious reputation. Supposedly, she can service any man under the table. The story focuses on one long and fateful day in her life, during which she receives various more or less perverted nobles, and occasionally the less noble, in her very stylish upper-class boudoir and salon and services them. Afterwards, she, with some difficulty, writes in her diary her opinion on them. Some of her clients on that day are a very old and horny aristocrat, the S&M loving Count de Sade, an inexperienced but "talented" farm boy who just came to town, three young aristocrats who bring two more girls for an exhibitionist swinger party, and finally Duchess of Roxbury who visits Kissey as the night falls. Although at first it seems that she also just wants to be serviced, it soon becomes clear that, unfortunately, this was not her sole reason for being there.

Notorious Tropes of the Daughter of Fanny Hill: