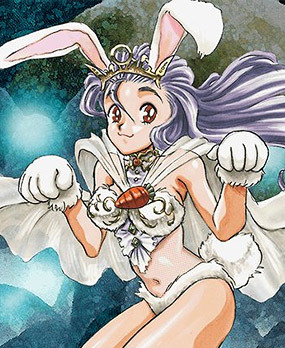 This princess nicely demonstrates the ermine... bikini effect?
Quinn: So you'll do it?
Daria: Right after I change into my fur bikini. (Tom smiles at this)
Quinn: Daria!
(Quinn storms out of the room)
Tom: Hmm, maybe you should make it easy. Give the poor kids a break.
Daria: I lied about the fur bikini.
Tom: Damn!
— Daria, "Lucky Strike"
Advertisement:

A two piece bikini, or some close variant, that is covered, trimmed, and/or lined with fur (either real or fake), or even feathers. Usually worn for Fanservice.

It's an uncommon, but highly pleasing costume. And unless it's heavily adorned, it's a bit more usable than a typical Impractically Fancy Outfit — at least for running around in warm conditions.

Could count if there is just fur trimming. In this case if the bikini is red, and the fur is white, it overlaps a little with Sexy Santa Dress (or even some Happy Holidays Dresses).

If the bikini is actually used for swimming, the way water acts on fur will be ignored or the fur will somehow be waterproof — though let's face it, a woman wearing one of these is trying to show off her body, not her high dive.

Everyday wear for a Nubile Savage or female Barbarian Hero. If you are a Jungle Princess, this is your Ermine Cape.

This trope even avoids a Double Standard, as men can have Loin Cloths, the favorite impractical outfit for northern barbarians across the realms of fantasy.

There's a notable variant with the more risqué works involving Beast Men (or, even more scandalous, Little Bit Beastly people) — where their actual fur or hair grows in exactly this kind of shape to cover their naughty bits while exposing as much of everything else as possible.

Sometimes the wearer also has a Feather Boa Constrictor.

A Sister Trope to Seashell Bra, Going Fur a Swim (when the bikini and fur are separate garments), Fur Is Clothing (in which a Funny Animal has removable fur, which might result in this trope).