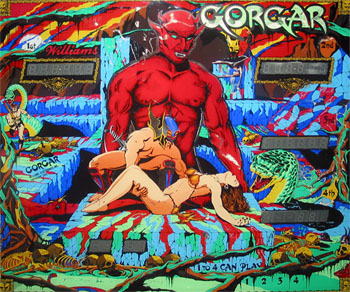 Gorgar is a 1979 pinball game designed by Barry Oursler and released by Williams Electronics. It features artwork by Constantino and Jeanine Mitchell, and sounds programmed by Eugene Jarvis. You play a barbarian warrior who ventures into Gorgar's volcanic lair to try to rescue your lover and face off against the demon, Gorgar.

Gorgar was the first commercially released pinball game to feature speech, with a vocabulary of seven words that could be strung together into simple sentences. The game also had a heartbeat background sound that would speed up during game play. To convince operators to order the game, Williams included a 45rpm record with some flyers that played the sounds the machine made. You can listen to that record here.

The game inspired the German power metal group Helloween to record a song called "Gorgar"; it was released on their album Walls of Jericho.

A digital version of this pinball is available in Pinball Hall Of Fame: The Williams Collection and The Pinball Arcade. However, due to the license for all WMS tables expiring, Gorgar is no longer available to purchase in the latter as of July 2018.

Me Gorgar. Trope me: