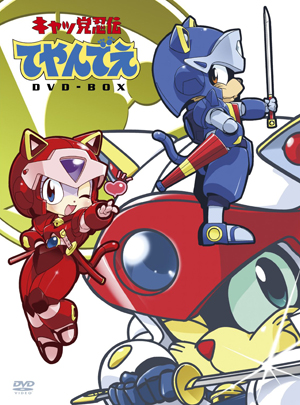 Would somebody PLEASE cue that description?

Kyattou Ninden Teyandee (キャッ党 忍伝 てやんでえ, "Cat Ninja Legend Teyandee" note The word "Teyandee" is an Edo period slang term that does not have an actual English translation. It is used by Yattarou/Speedy to show frustration or determination.). is an anime from 1990 that got an English Gag Dub the next year in the form of Samurai Pizza Cats. A long-standing rumor says licensor Saban Entertainment either didn't manage to receive transcripts of the original show's dialog, lost the transcripts, or received horribly translated scripts, so the writers had to make up stories and dialog from scratch. (The official story is less amusing: the original production company didn't send the scripts because they had given Saban carte blanche to turn the show into something a Western audience would find funny. Then again, given how Ghost Stories came about...)

The eponymous Samurai Pizza Cats [Nyankii] are the owners/employees of a pizza parlor, the actual "Pizza Cats" of the "dubbed" version's title.note During the mother and son's scenes, the son refers to them as "Pizza-ya-san", while the subtitles have him call them the "Pizza Cats", although really only for convenience. They defend the city of Little Tokyo [Edoropolis] and the royal family (pushy, spoiled Princess Violet [Usa-Hime], and her demented father, Emperor Fred [Shogun Tokugawa Iei-Iei]) from the machinations of the villainous Big Cheese [Kon-no-Kami, who is actually a fox, rather than the rat the gag dub refers to him as]. Between the giant robots, the ninja crows (known as the "Kara-Kara clan" in the Japanese version) and the...peculiarities of their emperor (or rather, Shogun), this is both harder than it sounds and easier than it ought to be. While the original Japanese show also took a light-hearted and goofy approach to its action show format, Samurai Pizza Cats is chock full of sly references, shameless puns, rapid-fire sardonic humor, and a total refusal to acknowledge the outdated concept of the fourth wall.

In 2013, Discotek Media released a DVD boxset of the original Kyattou Ninden Teyandee in its entirety (uncut and with subs, of course). Discotek also released a boxset of Samurai Pizza Cats in 2013, and followed that up a few years later with a one-disc Blu-ray release (made possible by all the episodes being in standard definition, natch). And as of late December 2015, both versions are available on Crunchyroll

for viewers in the US and Canada.

The Samurai Pizza Cats will deliver these tropes in 30 minutes or less:

Ladies and Gentlemen: the Samurai Pizza Cats Fanclub Oath:
Big Cheese: The Pizza Cats are Samurai, and I’d like to note,
Jerry Atric: Their antics take your breath away,
Big Cheese: Like fur balls in your throat.
Speedy Cerviche: We kittens are a special breed, we never call retreat,
Guido Anchovy: Whenever Big Cheese knocks us down,
Polly Esther: We land upon . . . our feet!
Narrator: So hail to thee, o Pizza Cats, please ring your little bell, although you may be pen and ink, we know you’ll fight like . . .
Speedy, Guido and Polly: PIZZA CATS!
Here's your index. Have a good day.